Gem Rocks is an exciting pokies game that was released by Yggdrasil in 2019. This title offers a rewarding game experience, with monster rocks taking over the screen for massive wins.

Unlike many classic offline slots games, there is no free spins bonus. While this may seem a bit boring, once you play the base game and see the cascading wins, combos and up to 4×4 monster rocks, you’ll understand how fun this one can be.

Gem Rocks works on the basis of Avalanche/Cascading Wins. This means for each winning combo you get, the symbols will disappear, and more will fall onto the reels. What makes Gem Rocks so unique, is that for a Monster Block is released after 2 wins, 5 wins, and 9 wins.

At 2 wins, a 2×2 Monster Block will appear. If the winning combo continues for another 3 hits, then a 3×3 Monster Block appears, connecting in the middle to offer massive payout potential.

For really lucky players, if the streak continues and you land 9 wins, the big daddy 4×4 Monster Block takes up the majority of the reels and offers an insane payout of up to 9,217x the bet. 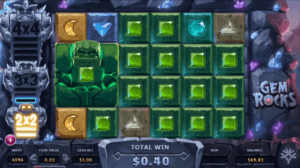 No. Gem Rocks is different to other pokies because there is no bonus free spins feature. So there is no option to buy into the bonus. Instead the base game is where the action is, with combo wins accumulating and rewarding larger monster blocks for bigger wins.

$1500 Bonus National Casino is an exciting online pokies site that has loads of fun games to play, including Gem Rocks and other popular Yggdrasil slots
VisitReview 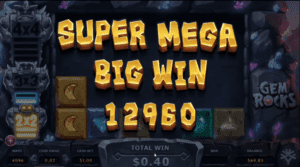